“There is not much left of me now. My roof has lost most of its shingles and offers scant shelter to the birds that fly in and out through my broken windows. My brick chimneys have been torn down and turned into garden pathways and my walls are a worn tired grey.

But once, I was young and dressed in smart white paint that reflected the warm Alberta sun. We faced those early pioneer days together, the Dekkers and I. From my upstairs window I used to watch Nan walk down the trail to the west with a wooden yoke on his shoulders on which to carry pails of water from a well about a half mile away. Somewhere in my attic I still store the weathered yoke.

Active steps were taken to demolish me completely but nostalgia and new plans have thankfully stayed their hand. So part of me still stands, dilapidated I admit, useful only to store tools and sacks of grain. But more important are the invisible things I store—a special bond with my small Dekker family, memories of fenceless grass and sky, an admiration for the strength of the prairie as well as its beauty and a small share in the kinship of this community built out of indomitable spirit and vision. In my lifetime I have seen Nan trudging on foot against the wind and I have seen TV pictures of men walking on the moon.

Yes, I am built of more than boards and nails, and like the prairie, that part of me endures.” 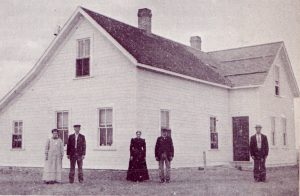 Still facing Alberta’s unblinking sun and harsh winds, the Dekker farm house stands on the original homestead purchased by Nan Dekker in the early 1900’s, shortly after his arrival from the Netherlands. The Dekker house was a two story building which housed Nan’s son Arie, wife Louisa and children. After Arie’s passing, his son Lou took over farming activities alongside his wife Frieda and son Kelvin. Eventually a new house was built and the original Dekker house was used mainly for storage and eventually became a home for a family of owls. It has been described as likening an old mill. Years have taken a toll on the Dekker house. The walls have become steadily more weathered but are still covered with warm memories and continue to be a beloved part of the Dekker heritage.

DFH is built on the idea of bringing fine custom craftsmanship to heritage wood, iron, and farm iniquities. Wood is harvested in part from original Dekker homestead farm buildings as well as from 80-year-old Plains Cottonwoods that once served as a shelter to shield the farm yard and home from wind and snow. Once declared as a Heritage Shelter Belt, these trees have now reached the end of their useful life as a shelter, but have found new purpose in inspiring creations designed by DFH.

Honouring past, mapping out the future. 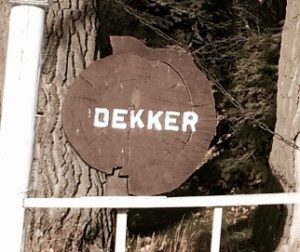 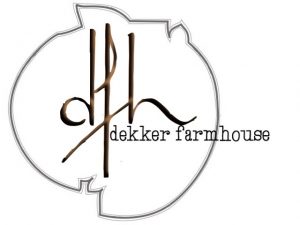